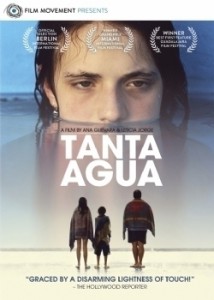 “What could be worse than being 14 and on vacation with your father, stuck indoors during a seemingly endless rainstorm? Alberto and his two children, Lucia and Federico, set off to a hot springs resort for a short vacation. Alberto, who doesn’t see his kids much since the divorce, refuses to allow anything to ruin his plans. But the springs are closed until further notice due to heavy rains, and Lucia’s adolescent rebellion clashes against her father’s enthusiastic efforts for family quality time. When she meets friends her age, equally bored at the rained-out resort, Lucia’s vacation starts looking up. But flings can be fleeting, and it’s her father’s reliable insistence they spend time together that proves to be the most meaningful part of their unexpectedly enjoyable getaway.”

“The daughter-father relationship and coming-of-age story is engaging, tender and subtly funny, with extremely sensitive performances from its two leads.” – Vladan Petkovic, Cineuropa

A NOTE FROM THE DIRECTORS (From Film Movement Press Kit)

There comes a point in life in which the love between parents and their children stops being simple and becomes complex and prone to misunderstandings. TANTA AGUA (So Much Water) is about that point in life.

A tiny, cramped house located in a rainy riverside resort is the setting for the characters’ misadventures. Alberto’s displays of enthusiasm are crushed by his 14-year-old daughter. The time they have spent apart makes them feel confused. A week may appear too short a holiday, yet it may be too much.

Amidst stubborn sprints in the rain for closed-down pools, tantrums, and overreactions, the characters keep getting in each other’s way as if trying to figure out their place in all this. A fling with a local woman, a bike accident, and a teenage unrequited love story, end up bringing them closer, unbeknownst to them.

At the beginning the film focuses on Alberto and his worries, plans and frustrations. Then, it slowly turns to Lucía, and eventually closes in on her, who, as she catches glimpses of the storm that comes her way, knows that sooner or later she will have to stick her head out and breathe.

This brief family adventure about people who are a little clumsy but who love each other, in spite of not understanding each other, aims at showing that, in the long run, things may not be as serious as they seem. Every family is a little ridiculous. What troubles us about our family is the fact that it is ours.

2nd Sunday Cinema is brought to you by the library, Chatfield Center for the Arts, Wits’ End Theatre and the Chatfield Lions.  This monthly event is free, ages 17+ welcome, and concessions are available for purchase. Join us for award-winning foreign or independent films on the 2nd Sunday of each month!